In 1975, as the academic phenomenon of Women's Studies spread rapidly across campuses, a group of faculty members brought their interests to light and began discussing the need for such a program of study at the University of Georgia.  As ideas for the program developed, initial courses were discussed and letters asking for advice and information were sent to other Women's Studies programs.

A story ran in the University of Georgia Community News on April 12, 1976 reporting that a new program in Women's Studies was being developed.  The article specified that the "first courses should be offered in either summer or fall quarters."  However, the certificate program was not to be passed by the Arts and Sciences Curriculum Committee until April 20, 1977.

In 1977 the Women’s Studies Program at UGA was created with Dr. Maija Blaubergs as the coordinator.  Maija Blaubergs, however, was denied promotion and tenure in 1978, and she subsequently sued the University for sex discrimination, citing her role in the Women's Studies Program as the reason her promotion and tenure were denied.  The University settled this case out of court.

The next coordinator was Deborah Herman, who left the University in the early 80s.  The Program operated successfully from 1977 until 1983.  During those years the Women's Studies Program had an administrative structure, including the coordinator, a secretary, and a steering committee.  The Program operated on a budget allocated by the Office of the Vice President for Academic Affairs.  It offered 14 courses, a certificate program, and a lecture and colloquia series.  Many, including Jean Friedman, Judith Preissle and Linda Grant, held the program together for years until it was turned over to Arts & Sciences as an interdisciplinary studies certificate.  The certificate program stayed on the books at this time, but was considered on hold until someone could direct the program on a full-time basis. 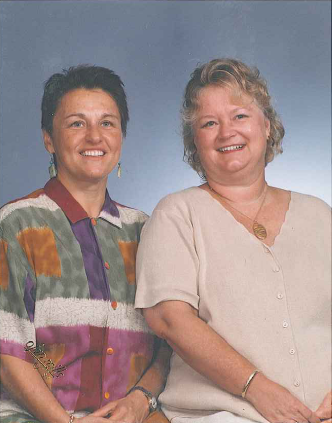 By 1987, a faculty committee met regularly to develop the groundwork for a revitilization of the program.  As a result, Heather Kleiner was made acting coordinator of the program for ten hours a week, in addition to her job as an advisor in the College of Arts and Sciences.  In 1988 five women submitted a proposal to then president Charles Knapp to revitalize the Women’s Studies Program.  It was approved, and Dr. Patricia Del Rey was named director and Heather Kleiner became her associate director.  This new Program reported to Vice President for Academic Affairs, Bill Prokasy, and found a home for many years on the second floor of the library.  By May 1988 the Program had seven candidates for the certificate.

In March 1989 the WS prefix for courses in the Program was sought and obtained from the University Curriculum Committee.  Only one full year after the Program was reinstated, 15 undergraduate students were enrolled in the certificate program.

We are inspired by the group of affiliates who stepped forward to develop and teach the first courses before the program had any core faculty.  By giving generously their time and energy they built and strengthened the program. 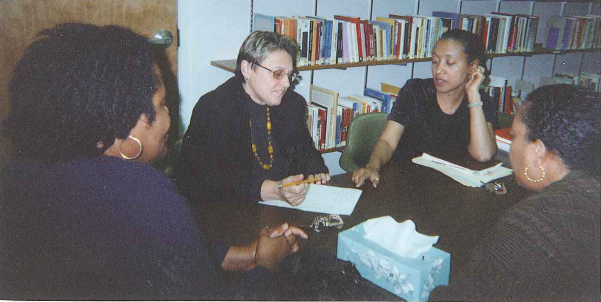 In 1990, the first three core faculty members with joint appointments in Women’s Studies were hired, including Miranda Pollard, Josephine Beoku-Betts, and Cindy Jenefsky.  The next year, Patricia Bell-Scott was recruited.  And later, more core faculty were hired.

The 20-hour minor was offered Fall 1991 and the graduate certificate was implemented in early 1992.  The first two graduate certificates were conferred Winter 1992 to Elizabeth Tisdell, who returned to UGA in March 2012 to present our Women’s History Month keynote address, and Trish Shewokis.  Joy Beasley became the first undergraduate student to complete a minor in Spring 1993. 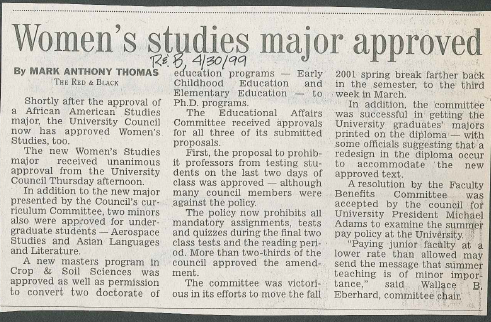 On May 11, 2002, the first students graduated with an A.B. degree in Women’s Studies.  Those students were Margaret Mitchell, Kathryn Rhodes, Lotus Seeley, Suzanne Scoggins, and Lindsay Brown.

Dr. Doris Kadish was the interim director after Patricia Miller moved on in 2005.  Dr. Chris Cuomo was named director in 2006 and held the position until 2009.  Dr. Juanita Johnson-Bailey was then named director in 2010, with 9 core faculty members currently holding joint appointments and over 90 affiliate faculty contributing to our courses and programming. 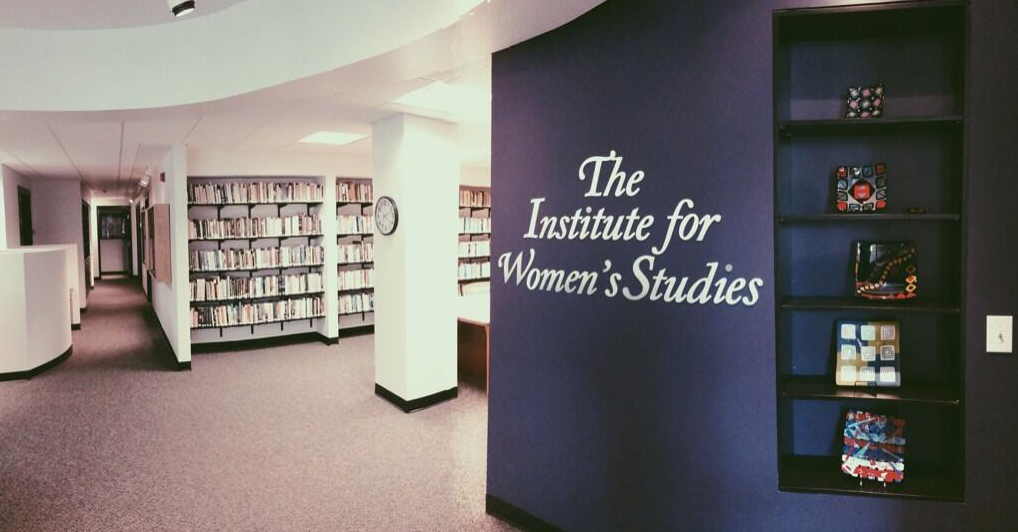 The Institute for Women’s Studies, now housed in Gilbert Hall, also continues to host a weekly colloquia series each semester, Women’s History Month each March, the annual Andrea Carson Coley Lecture in LGBT studies, and the biennial Women and Girls in Georgia Conference.  In November 2016, the Institute for Women's Studies dedicated the Patricia Del Rey Seminar Room and the Heather S. Kleiner Conference in their Gilbert Hall home to honor the founding director and associate director. 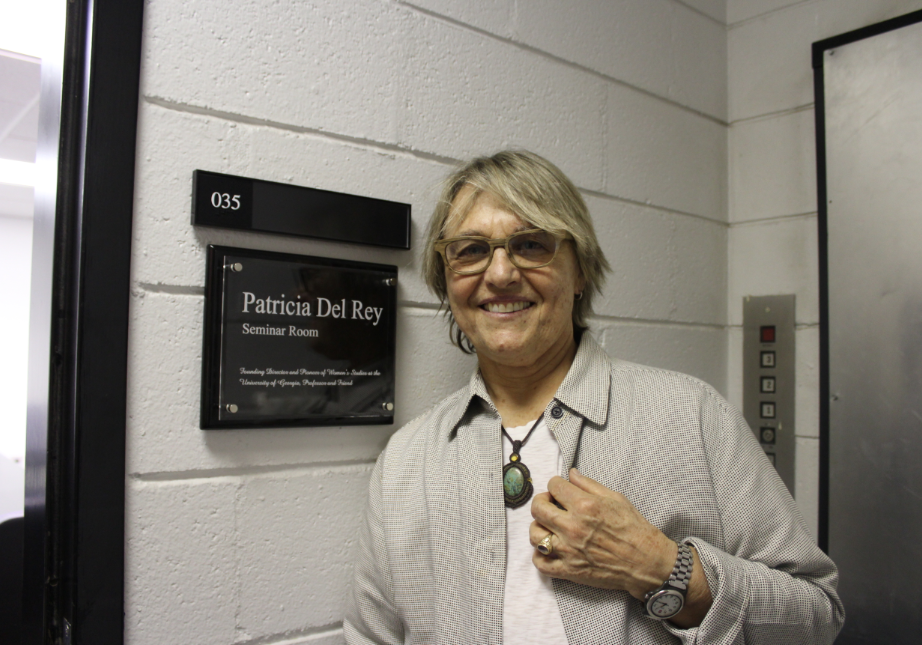 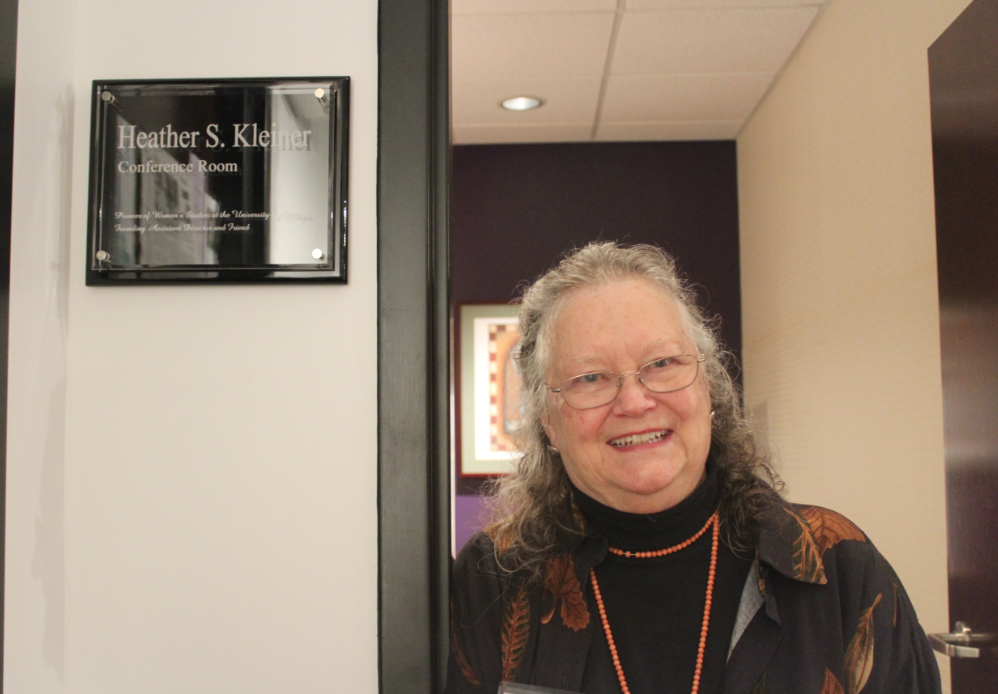 Information in this history was compiled using archives, newspaper reports, the 2002 directed research of Women’s Studies alum Beth Yash, and the memories of those who have been involved with the program over the years.  We apologize if we have missed recognizing anyone who worked behind the scenes or on the front lines to make Women’s Studies what it is today.  As we continue to gather our history, please inform us of any other movers and shakers who impacted Women’s Studies at the University of Georgia, to whom we are forever indebted.

The Institute of Women's Studies appreciates your financial support. Your gift is important to us and helps support critical opportunities for students and faculty alike, including lectures, travel support, and any number of educational events that augment the classroom experience. Click here to learn more.

Every dollar contributed to the department has a direct impact on our students and faculty.